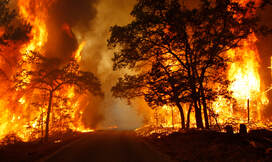 Satan's favorite past-time was wreaking havoc on earth. He sent hurricanes, tornadoes, mudslides, avalanches, floods and droughts. He attacked the institution of marriage, broke up homes,  and redesigned schools under the guise of keeping up with the times.  He  lied to the people.  He whispered to children 'You don't have to obey your parents.'  He shouted to sinners, 'It's alright if no one sees you do it.'  He penned catchy slogans like, ' Get all you can, Can all you get, and Sit on the rest.'   He told them law enforcement was evil and everything should be free.
​ 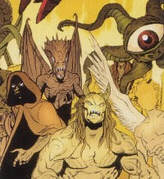 He had sworn to take over the world and his plans were working well. Countries were becoming Communist governed. Young people didn't want to get a job and marriages were falling at a record rate. Crime was common and becoming increasingly more violent.  Fear was the norm.  Satan and his angels laughed as the people daily popped an anxiety pill into their mouths. "As if that will help."  one of his angels said. "We've got more things to throw at them and that pill won't make us go away."

Each time Satan sent a disaster, the people fell with broken hearts and disappointment. Then he watched with deep sadness as they bounced back, recovered, rebuilt their houses, and returned to normal life.  He grew weary and tired of waiting to take over what he thought was rightfully his.

After surveying the debacle, he called a mandatory meeting of his diabolical demons. "I'm tired of waiting.  I want to be ruler of the universe soon.  I've thrown everything I can at them and yet they carry on with their lives as normal. What can we do to speed up the process of ruling the world?"

Suggestions were made, but it seemed each one was just a remake of an old scheme.  None of them would help him reach his goal of ruler of the universe.  Satan was filled with anger. "I orchestrated a revolt against God himself.  Why can't I figure this out?"  As hatred filled his heart, he noticed a nerdy looking demon standing quietly against the wall. With malice and evil intent on his mind, he walked slowly and deliberately toward the demon. "Well, book boy!  Do you know the solution."

The small, quiet demon look up at his master and said, "Sir, it is not the solution you are missing.  It is the problem."  Satan's evil laugh rang out as he mocked the demon.  "Then what is the problem, you sorry egghead?"

"The problem is that you are giving them time to recover before hitting them with the next thing.  If you hit them with too many things within a short time, they won't have time to recover.  They will fall like bowling pins."

Satan listened, contemplating the idea.  "I think you might be right. We'll see how the smaller countries handle the disasters in 2019.  But, as I live and breathe, America will be mine in 2020."

The end of 2019 was a busy time for Satan.  He sent three civil wars and two outbreaks of diseases to Asia.  Without skipping a beat, he sent a natural disaster, food shortage, and refugee catastrophe to Africa. At the same time, he sent an economic crisis to South America.  All the while he was planning for a worldwide take-over in 2020.

Satan and his demons celebrated their almost certain success.  At the end of the party, one demon yelled, "Hey boss, how do we start this year off so that there is no chance of failure?"

Satan smiled and said, "Just you watch.  I'm going to hit the world with a health disaster that will knock their socks off. It will be called the Coronavirus.  It will be fast moving, easily transported, extremely contagious and deadly. It will hit the entire world at once and no one will be immune.  This virus will hit them in every fiber of their being."

Satan and his demons watched with glee as one by one the people fell ill.  They delighted as the older people, small children, and those with other illnesses died a painful death.  They jumped for joy when the hospitals were at full capacity with few supplies to treat patients. There were no masks to protect the health care workers, so one by one they began to fall.  They did a cheer when businesses were ordered to close unless they were essential to maintaining life.  Schools were closed. People were ordered to shelter in place. Groceries were in short supply. Truckers were driving around the clock with little nourishment. All of this made Satan very happy, but when the churches closed, he danced in the streets of hell.  Everyone was sick, dying, economically hurt, or just plain exhausted.  "America is mine," he shouted with a triumphant fist pump. 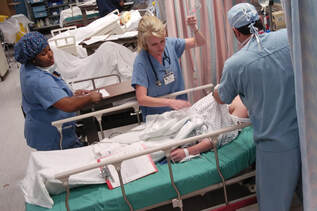 They were so busy celebrating they didn't notice the nerdy demon standing outside the joyous circle. "Wait, something is happening," he yelled. Slowly the noise quieted and one by one the demons went to see what was going on.  They each groaned as they surveyed the situation.  They had never expected this.  America hadn't fallen at all.  In fact the American people and businesses had stepped up and were figuring out how to work around the disaster.

Employees were working from home. Teachers were teaching online. Car manufacturers stopped making cars and started making respirators. Manufacturers with sewing machines had stopped the assembly line and were sewing masks. Businesses were paying employees to stay home. Restaurants were delivering food with no delivery charge. Distilleries were making hand-sanitizer.  What brought Satan down the most was seeing the churches broadcasting sermons from the internet and receiving more views than their usual congregational attendance.

Satan and his demons learned a lot that day.  They learned that God is in control.  They also learned that the American people are strong, brave, and resilient. Because of the fortitude of the American people and God's grace, America would not fall until God determined.  The world was created on God's time and will end on God's time.  Not Satan's.