Susan sat on her favorite park bench. She usually enjoyed watching the people walk.  Hearing bits and pieces of their conversations was great entertainment. Sometimes her animated imagination  pieced the tidbits together, forming humorous conversations. The outlandish looking people,  bizarre comments,  and imaginary conversations were a constant source of entertainment and company to her.

​She was a quiet widow living alone with few hobbies or friends.  Her children were grown and busy with their own lives.  They still saw that her needs were met as time allowed. Susan tried not to bother them unnecessarily. So she occupied her time with other things. 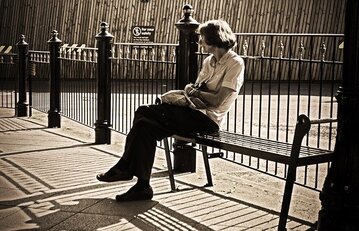 Today the sights and sounds of the park weren't bringing Susan enjoyment.  Today was Valentines Day.  It seemed like everyone was walking with someone else.  Each person seemed to be part of a couple.  She watched as they walked hand in hand. Some talked to each other.  Others just enjoyed being together.

That's the way it had been for Susan and her husband.  They didn't have to talk.  They communicated with their hearts.  Her heart had practically stopped beating when he died in an accident at 48 years old.  She was suddenly a young widow with teenage children to finish raising and supporting.  Fortunately the kids were well behaved and grew into well-adjusted adults with successful careers.  Susan was very proud of them.  Her friends complained that she bragged on her 'beautiful, intelligent children' too much, but she couldn't help it.  They were the light in her dark world.

Through the fog of her self-imposed pity, she saw a young man run after a young woman.  In his hand was a flower he had probably picked from a neighbor's flower garden.  She remembered when she was dating David.  Once they were walking down the street and happened to stroll past a beautiful rose bush in a neighbor's yard.  The flowers were deep orange in the middle and faded to a light yellow toward the edges.  When Susan had expressed pleasure over them, he decided to get one for her.  Unfortunately, the neighbor was a cranky old woman who didn't share David's enthusiasm of bestowing a gift to his love.  The neighbor ran out of the house, broom in hand.  She chased David down the block and around the corner.  Susan would have been concerned for him, but the scene was just too comical to fret. The memory still made her laugh.

Dismissing the memory, she saw a young boy running with a heart-shaped box of candy in his hand.  The little boy proudly presented it to his mother, who clearly did not need the chocolates. She remembered her own son running into the house when he was about five years old.  "We bought you some candy," he announced.  Susan had given him a hug and expressed appreciation.  She opened the box to find empty wrappers.  "What happened to the candy?" she asked.  "It was a long way home and I was hungry.  They were real good.  You would have liked them" She couldn't help but smile as she remembered the blonde headed boy with the impish grin on his face.

Susan began to feel both happy and ashamed.  She realized that she had been many people's valentine throughout the years.  Few people were blessed enough to experience as much love as she had.  She was also ashamed that she had hosted her own pity party.  "Dear Lord, please help me remember the love you sent my way through your children.  Forgive me for feeling sorry for myself.  Help me give as much love as I have received."